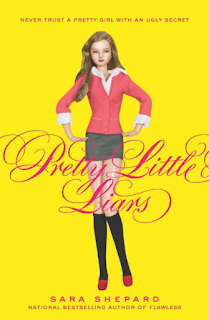 Pretty Little Liars by Sara Shepard captured my attention from the very first breathtaking page to the last. I had previously read most of the Pretty Little Liars series a couple years ago but decided to stop out of boredom and there being too many books but there were so many things I liked about this first installment.

Pretty Little Liars is the first of many books following four teenage girls -Aria, Emily, Spencer and Hanna- after the mysterious disappearance of their friend Alison DiLaurentis.  Ali has been missing for three years and she was the only one who knew her friend's deepest, darkest secrets.

Just when the girls are starting to recover from the loss of their friend, they simultaneously start receiving creepy text messages holding within them all the secrets from the girls' pasts; things only Ali herself would have known. This book definitely keeps you gripping the edge of your seat.

As for the characters... Even though they have some tremendous secrets under wraps and make some really horrible decisions, most of the time you can see their reasoning behind those mistakes.

Aria is probably my favorite character. I just love how out-there and unique she is

There were also some things that I viewed as bonus material in this book. Even though there were 35 chapters, the chapter length ranged from about 5 pages to 12 so the reading experience really breezed along.

Another thing that helped with that was Sara's writing style. It's very simple but it flowed seamlessly and her vocabulary kept you wanting more.

If you haven't read this series yet, I highly recommend it! Now, off to read book two.

Posted by BookieObsessed at 1:44 PM