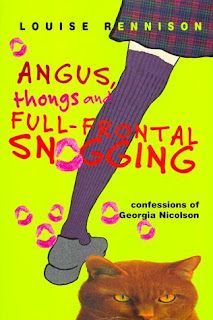 I remember reading some of the books in this series in late elementary school and the early years of high school and absolutely busting a gut laughing and as I re-read this first installment recently, I was surprised that I almost didn't find it funny at all... There were rare moments when I giggled or cracked a smile but for the most part, I found this story just light and fluffy and even bland at times.

I never realized in the past how much dark humor is used in these books with references to killing, suicide, cutting, incest and perverted guys. All of which I probably had a reason to find funny years ago (being immature and all) but I just didn't anymore. More often than not I actually found myself cringing or rolling my eyes and while it can be entertaining at times --probably enough that I'll continue the series-- a lot of the time it was just really underdeveloped.

Not much more can be said...

Posted by BookieObsessed at 1:50 AM