Me and Earl and the Dying Girl (Revised Edition) | Review 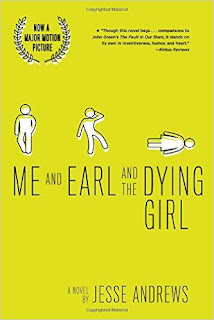 I was really hoping to love this book. It has been compared to The <b><i>Fault in Our Stars</i></b> which made me really excited seeing as that book was one of my favourites of 2014 but honestly, <b><i>Me and Earl and the Dying Girl</i></b> was <i>nothing</i> like that book! The only similarity between them was that there was a character with cancer. And to be completely truthful, I don't know if it's just me, but Rachel felt like a side character with not much importance.

The book <i>mainly</i> focuses on Greg and how he refuses to make anything resembling a friend and Greg and Earl making crappy homemade movies. And again... Earl also seems of little importance to the story. Maybe it's just the way Jesse Andrews writes but I felt so disconnected from the story.

The book was also supposedly funny but I didn't laugh once... To me the story was quite bland and although there were very few redeeming qualities and characters that brought this book up to three stars for me (Mr. Mcarthy being one of them...) I wouldn't recommend this book.

Posted by BookieObsessed at 9:35 AM